Hi everybody, I am Irene and, as well as many runners, I face every day with the problem of improving my running technique in order to get better and better performances and, at the same time, prevent injuries.

The Net if full of media of professional athletes. they are really good paradigms of good running action. Anyway you easily notice they have different actions, even if all of them are efficient. They can run with longer or shorter steps, less or more frequent steps. These differences depend on their natural predisposition and on their event, on the distance they cover, their speed and power.

First of all we have to say that there isn't only one running action good for everybody. Each athlete has a personal way of running that can be improved in order to be more efficient. Every person has his own running action with its strength and weak points. We all need to improve our weak point in order to have a more efficient action that could give us the the opportunity of running faster with less effort without bringing physical harm.

Most of athletes aims to an action as circular as possible. What I mean is the knee that comes up with the leg almost parallel to the ground. After that the leg goes down vertically and it land on the forefoot. At the end the foot is rapidly recalled to the gluteus and another step is going on.

Learning an efficient running action is a long process that needs a long time and a daily focused training. Let's analyze most common defects for runners and some useful exercize which can help to correct them. 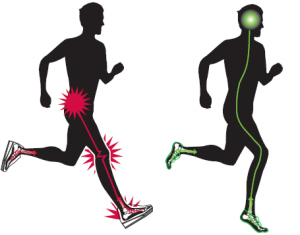 Typical of long distance runner, they land on the knee instead of the forefoot.

While the forefoot landing takes advantage of the anatomic lever of the ankle, the heel landing disperses the energy and causes harms to the joints on the legs and back increasing the risks of injuries.
About this the best piece of advice I can give you is to choose the right running shoe inspired to the natural running phylosophy. The Venice Sport Shop and Sport Shop Maerne are specialized in this. A good choice could be a shoe with a lower an lower drop that makes you landing on the forefoot.
LOW KNEES AND KICK OF THE FOOT 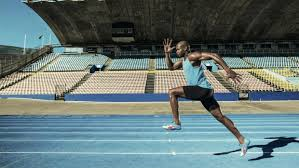 The high knee makes steps of the running action longer, this means we are going to do less steps in the sae distance.
In this case the best exercizes to do are drills which emphasize the rising f the knee and of the foot to the gluteus, maybe adding them in the warming up for hardest training sessions.
I'm thinking about 'skip' and 'kick under'.
The first one consists of the going up of the knee, the leg is parallel to the groud and the knee is 90° open. Then the leg goes down perpendicular to the ground.
The second exercize consists on the rising of the knee but also of the foot to the gluteus. In this case the angle of the knee is closed.
ARRANGED ARMS
Arranged arms are a waste of energies in running action, too. A good piece of advice could be doing some strides or reps with batons keeping them parallel in running direction.
I think to have given you enougth ideas to improve your performance through more efficient running action. I hope to have given you some useful hint to go after your running goals.
I wish you good luck with your workouts and thousands of big PRs.
Like This
Twitter