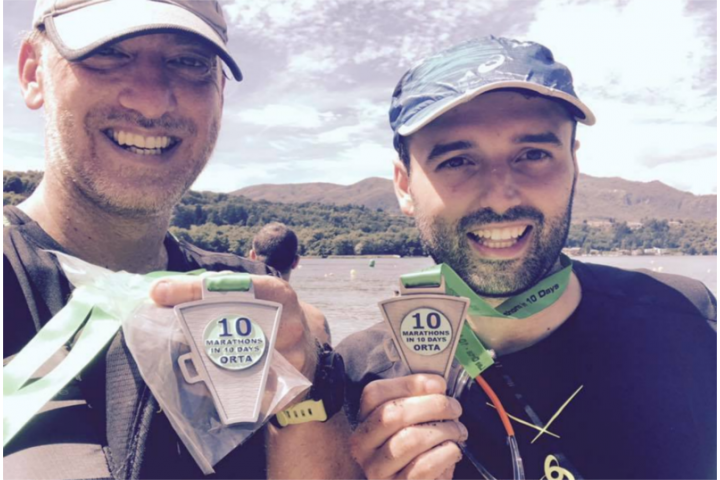 I am Riccardo Agostini, a 34 year old guy and I have practiced different types of sports since I was a child.I've always raced doing an hour of jogging about once or twice a week, on the other hand, while I also practiced other sports.

Now I have been running more regularly for 5 years, making longer mileage and duration exits and I had the honor so far to give myself some half marathons and to be twice the guest of the queen of all races the Marathon .

I think (and it is a purely personal thought of mine, that does not want to offend anyone), that running and in particular long distances races, is one of the most healthy and complete sports in modern living conditions.

This consideration is strengthened by the condition in which I feel after a good training session: full of positive endorphins, which lead me to think, work and feel much better.

Obviously before tackling long distances such as the Marathon (the mother of all running races), I think it is smart to adopt all the necessary medical tests and above all to be aware of the not indifferent physical effort that certain distances and competitions require.

We should do this all amateur or professional runners, with regular attendance for their own sake and sense of responsibility.

From the comparisons with my personal basic physician and with other sports doctors, the fundamental checks that I have always advised to carry out periodically concern:

If there are positive outcomes, concerning all these points listed above, I think at this point the rest will do it goodwill, constant training, a regular diet and good running shoes !!!

After this brief personal introduction regarding this type of sports competition, which has implications in all parts of the world, I show you a particular curiosity, which I read in a sports magazine, linked to the famous and highly acclaimed 195 meters final.

The origin of the choice by the World Athletics Federation, to officially declare that the Marathon, to be such, must measure forty-two kilometers and one hundred ninety-five meters, is derived from the Olympic Games in London, year 1908.

Until that date the Marathons had a duration in the world that could vary from 40 to 42 km effective. The curious historical anecdote that underlies this sporting decision of a global nature is linked to a request from the royal family to be able to applaud the athletes from their stage in the stadium, which is exactly 42 km and 195 meters from the start that was right in front of the Windsor castle.

Since that moment, the universal and official distance for the Marathon is just 42 km and 195 meters.

Preparing a Marathon for many nowadays also means organizing a trip, an experience, to be shared with fellow runners and maybe even by the family, which supports runners with typhus.

In fact, many packages are also offered by many travel agencies for various European capitals: holiday accommodation and registration to the local running competition, all included: this is also becoming a healthy form of sports tourism !!!

But have you ever wondered what are the most spectacular routes offered by the Maratone panorama?

One of the most extreme ones is the North Pole Marathon.